No Result
View All Result

4 things to know about ICOs in Singapore

Singapore might not be the first place that comes to mind when we think about cryptocurrency, after all, the country does not explicitly recognise virtual currencies since they are not securities or legal tender. This is in comparison to other jurisdictions like Estonia, that have a specialised cryptocurrency license. This does have it disadvantages, as regulating virtual currencies as one would regulate traditional assets might not capture all the intricacies of virtual currencies, and therefore might result in a more general framework that is less effective in protecting consumers’ interests and ensuring certainty in the system. Fortunately so, this is not the case in Singapore as the regulatory framework governing virtual currencies, the Payment Services Act 2019, is being constantly revised to reflect the dynamic nature of the cryptocurrency market. Similarly so, the other Acts which govern cryptocurrency activities are equally comprehensive, being tried and tested systems implemented by the country’s main financial regulator, the Monetary Authority of Singapore. These acts are the Securities and Futures Act which governs the offer or issue of digital tokens, and the Financial Advisers Act which governs the provision of financial advice regarding digital tokens. In fact, proposed changes are underway to more explicitly define and regulate cryptocurrencies. These are just some of the reasons why opening a cryptocurrency company in Singapore is such a popular option. The same reasons would also explain why Initial Coin Offerings (ICOs) in Singapore are equally popular, with the country being the 3rd most popular ICO market in the world. Here are the 4 things you should know about ICOs in Singapore. 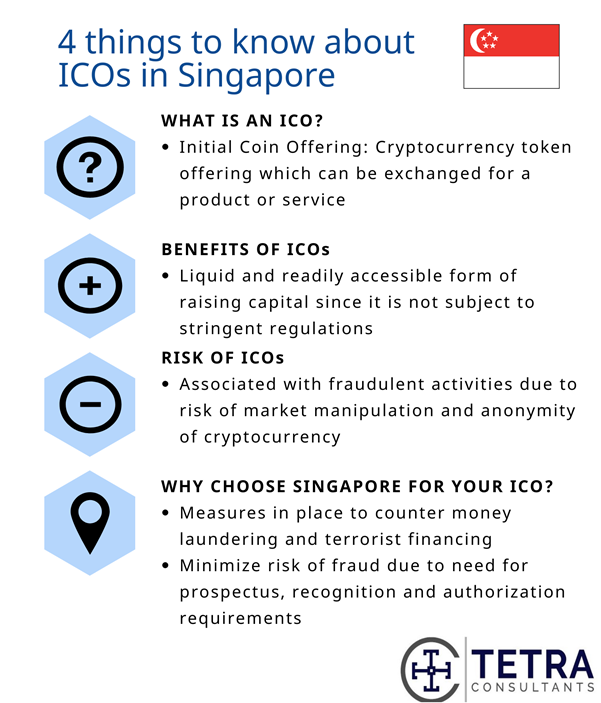 What is an ICO?
An ICO stands for an initial coin offering, and is similar to an IPO, or an initial public offering. Both work similarly by allowing the company to raise funds and capital in exchange for issuing equity to stakeholders, just that an ICO offers a cryptocurrency token which can be exchanged for a product or service provided by the company. These cryptocurrency tokens might also be used to represent a stake in the company, similar to how an ICO works, but behave closer to an asset as opposed to equity since the ICO offerors retain full control of the firm.

Companies interested in raising money through an ICO will need to create a whitepaper outlining the project or company they are listing, duration of the ICO, how much money needs to be raised and other information. While this is similar to a prospectus of an IPO, differences between the two arising from differing levels of regulations lead to significant differences in risk and accessibility that you should be aware of before you embark on an ICO, either as an offeror or as an investor.

ICO vs IPO
As compared to IPOs, ICOs are less tightly regulated and thus represents a more accessible option in raising capital for companies, and also a more accessible investment option for smaller retail investors. The ICO white paper is generally a lot less descriptive as compared to the prospectus of an IPO, which means that less financial information is revealed and ICOs often tend to be more unreliable. The due diligence and legal requirements for ICOs are also lesser, which thus results in less transparency and protection for the investors. Beyond this, ICOs are not listed on exchanges, which thus exempts them from the same disclosure requirements that IPO firms are subject to.

Benefits of ICOs
It seems then that the unregulated nature of ICOs behaves as a double-edged sword. While the lack of regulation and compliance measures allows companies and investors easier access, this comes at the cost of investor protections. Although ICOs have often been compared to a form of crowdfunding or venture capital funding, ICOs behave more as an intermediary between these two funding structures. Crowdfunding is usually a non-obligatory form of funding where members of the public essentially donate to an idea they find promising, whilst venture capital funding are on the other end of the spectrum, where companies provide specific guidance to new and promising firms whilst retaining more direct forms of control (such as by sitting on the Board of Directors). Venture capital firms also require more tangible ideas as compared to an ICO.

ICOs thus provide a useful alternative to venture capital (VC) funding for firms that are in their early stages of funding whilst the risk profile is still relatively high. Due to the greater popularity of ICOs as compared to crowdfunding, it makes it easier for such firms to raise the necessary capital without needing to conform to the requirements set out by VCs. From an investor’s perspective, investment through ICO often is more liquid as compared to VCs, granting them a ready exit strategy.

Risk of ICOs
On the other side of the double edged sword, ICOs have also been become notorious for their associations with scams, frauds and money laundering or terrorist financing activities. ICOs are often a lot more volatile given that there is no clear token valuation system, putting them at risk of market manipulation leading to misleading price inflations with no economic basis.

Due to the anonymity of cryptocurrency, and the fact that such operators are foreign and online, it is difficult to trace and verify their authenticity. Thus, your invested funds might be misused for fraudulent activities without your knowledge.

Why choose Singapore for your ICO?
This brings us to why Singapore would be a good choice for your ICO. Although Singapore does not explicitly regulate ICOs, participants are expected to be accountable for all money laundering and terrorist financing risks by conducting their own due diligence. This helps to address one of the main risks arising from ICOs.

New rules from the MAS also state that digital tokens that constitute securities or units in a collective investment scheme will need to have a prospectus, and also may be subject to recognition and authorisation requirements. All of this help to mitigate the risks of fraud commonly associated with ICOs, making Singapore a good place to list your ICO since investors are more likely to want to pay for the premium of certainty.

Digital Marketing and Its Scope In Bangladesh 2022

How to Start a Digital Marketing Business in Australia

Ultimate guide to GST in Singapore

Ultimate guide to GST in Singapore

No Result
View All Result